By AnaisOctober 4, 2019July 18th, 2020No Comments
The September 2019 edition of leading VR magazine, InAvate features a case study of the Hiker Lab that we delivered to the University of Leeds, in the UK.

The University of Leeds continues to blaze a trail in educational immersive spaces with its new pedestrian simulator setting the standard for cave based virtual environments. Reece Webb reports. The University of Leeds called on Antycip to deliver its new Highly Immersive Kinematic Experimental Research pedestrian lab, or HIKER for short. Professor Richard Romano is a Professor of Driving Simulation, Institute for Transport Studies at the University of Leeds. He said: “The original focus of HIKER was to look at the interaction of pedestrians with automated vehicles. That’s our primary research purpose and what we designed the system for. Humans are very complex, automated vehicles are just developing at this point and being able to test the interaction between them is very difficult. If you’re going to be trying new experimental algorithms, you definitely don’t want to be doing that in the real world, so in this space, we can safely have a pedestrian interact with traffic, learn how pedestrians move, learn what the best strategies are, understand the safety aspects and so on.” A VR cave system was chosen over a head mounted display (HMD) oriented system to provide a collaborative experience for multiple users without the isolating effect that conventional HMD VR headsets induce. Romano added: “If you’re going to have a different infrastructure layout for different simulations with different curves, pavements, or pedestrian refuge, if you’re going to do that in VR completely using a headset, than with the physical elements, you have so much work to replicate it." “It quickly gets to the point where you can’t replicate it in a valid way to be able to do those tests. HMD’s are great for some things and they definitely create an immersive experience, but when it comes to being able to look at a group of people interacting or interacting with a physical environment, the cave type system is much better.” The HIKER cave is the largest cave based pedestrian simulation environment in the world, allowing users to interact with an array of virtual urban environments and vehicles in a 9mx4m walking space. Projector manufacturer Barco worked in collaboration with simulation integration specialists Antycip to complete the project. 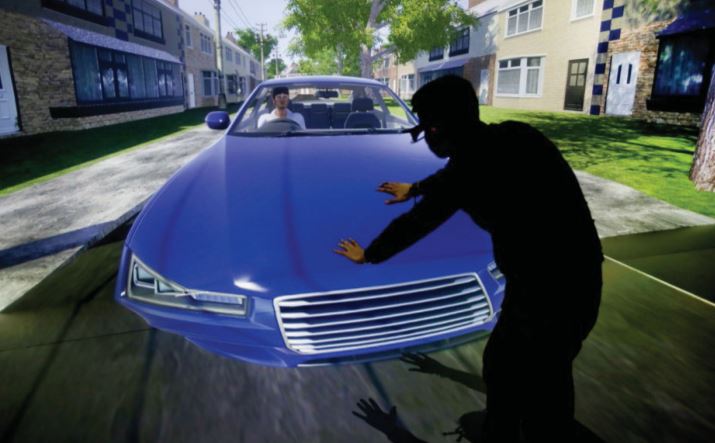 John Mould, commercial development manager, Antycip, explained the company’s long-standing relationship with University of Leeds: “We have worked with the university providing specialist technologies for almost 20 years to date, covering simulation software tools to immersive projection based display systems." “We started exchanging and consulting with Richard Romano and his team from an early pre-tender stage, trying to qualify what technologies he required to meet his funding objectives and how unique his vision of this cave would be to achieve their goals as this clearly isn’t a standard solution.” The HIKER cave differs to a standard cave configuration because of its elongated shape, providing the user with a large virtual corridor of physical space to explore during simulations. Mould clarified: “Typical caves are normally a lot smaller in terms of their form factor, they will usually feature one dedicated projector per “face” of the cave system. When stepping inside a cave you are immersed in terms of your vision based on the amount of faces that comprise the rear projected displays interior. “Sometimes you can have a floor or ceiling projection face combined with the primary end wall face and the peripheral wing faces, it often depends on the user’s budget or research topic to how immersive the caves field of vision needs to be. For Leeds University we have four faces which includes a projected floor beneath our feet. Operating four faces to surround a user is not in itself unusual as a requirement but it was the elongated dimensions of the cave for this project that sets it apart. The university is now able to track the full body of a pedestrian moving down the volume of this virtual corridor that’s 9m long and 4m wide.” Three Barco F90 laser phosphor projectors were used on the left-hand and right-hand sides of the cave, with one F90 at the back and another focused on the floor delivered by a specialist mirror folding its light path. The F90 projectors feature a native resolution of 2560x1600 at 120 Hertz, with 4K pixel shifting technology to offer a 60 Hertz monoscopic image, allowing the university to switch between 4K pixel shifted mode and the wide QXGA mode. Mould found that edge blending would be a necessity to meet the requirements of the university. He said: “We have a clever calibration system from Vioso that we’ve specified to address the multiple projectors and to deliver the digital corrections to the images. A lot of standard caves don’t require edge blending due to their pixel butted single projection based faces. In this instance the calibration system can download its calibration results directly via the pulse electronics incorporated within the Barco projectors, this implementation ensures that the digital correction applied is agnostic from the software application used for rendering the visuals. “In essence, we’re making all the overlapped projectors form a continuous image by using Vioso’s camera calibration system to automatically calibrate the four faces of the cave independently and combine the end results. There are four POE cameras each pointing at a face of the cave, with one pointing to the floor, one pointing to each of the wings and one to the rear. The combined result is truly stunning and makes the virtual world as seamless as possible around the user.” The projectors are driven by Nvidia Quadro P6000 graphics cards, with a user interface and control monitor that is backed off from an equipment rack to access Hewlett Packard Z4 workstations for administration and for control of the entire system. An array of 10 Vicon Vero spatial tracking cameras are used, situated to look into the cave’s volume to create a volume of area that users can harness to track an individual with reflective markers on their body and a hand-held navigational device if required. Antycip worked in collaboration with Barco on the project to deliver custom Barco screens, delivering a 4m x 2.5m rear face and two 9m x 2.5m faces, with an optical coating that supports the ability to have low reflectivity with high levels of contrast. The screens are in a custom built framework that features a maintenance access capability, allowing for a winch to lower down projectors for maintenance purposes. The screens presented their own challenges in the university space as Mould detailed: “The most challenging part was to get the screens inside intact without being damaged. We don’t want to damage them, they’re very expensive and specialist and they’ve got to be carefully handled with the access equipment to get them inside the confined space where they then have to be erected and mounted into the mechanics of the cave itself. “Luckily, the university had a very large roller door pre-existing into that building, and John Burgess our project manager did a sterling job of co-ordinating the mobile crane that was used to unload the individual screens. Having to replace them could have been catastrophic if things hadn’t gone to plan.” Looking to the future, Mould said: “We’re about to install a small upgrade for the university’s driving simulator’s projectors. We’re going to replace three of the forward projectors within that driving simulator.” Read the original article online here Or download InAvate September Hiker