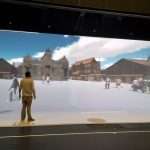 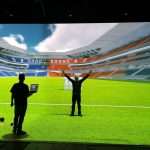 We installed a very large three-sided VR Theatre (12m x 4m x 4m) for the ENS Rennes, which is being used to study sports team communication and interaction on the field, and from there how to train teams to be better at both.

This innovative technology makes it possible to introduce a virtual opponent to an athlete, enabling better understanding of reactions such as a goalkeeper facing a shot at goal, or a rugby player facing the arrival of an attacker for example. The objective is two-fold: To improve sport performance, which has prompted partnership with some sports clubs and federations, but also to find new approaches to the rehabilitation of patients with motor impairments.

Set in the university’s large 30m x 20m gymnasium, the Immermove CAVE is the result of collaboration between higher education and research partners in Rennes – including ENS and University Rennes 2, alongside the MimeTIC project team from Inria and Irisa.

In order to meet the client’s requirements for a large immersive room with minimum maintenance required, we specified four Christie Mirage 4K25 in total to power the 12m x 4m back-projected main screen as well as the direct-projected ground screen area. Combining the power and efficiency of Xenon illumination, the Christie Mirage 4K25 is the only DLP 4K projector capable of offering 120Hz performance.

The first phase of the project took six months from point of order to completion, and included the first part of the installation of the 12m x 4m front and ground projection area, each with two Christie Mirage 4K25 projectors in situ.

Phase two included the second part of the front and ground projection areas, plus the addition of a 4m x 4m side projection area to the right served by a Christie Mirage WU20K-J. Antycip also specified Vicon Bonita cameras and an Apex system for content and athlete tracking. Active stereoscopy is provided by RF Volfoni ActiveEyes with rendering software by Techviz. Antycip also specified a full body tracker and active 3D glasses which can be worn by the athlete. Finally, a 5.1 surround sound system maximises the sense of immersion in the space.

There were a number of challenges to overcome on the project – not least making a 4K and 120Hz solution for a 12m x 4m screen area. Having a floor that is an integral part of the projection surface meant that we had to design a ground surface that could not only be stepped on constantly, but also perfectly match the content seen on the screens. Further complexities needed addressing during the installation phase, including hardware stabilisation and bandwidth management, all achieved thanks to our team’s expertise.

The technical equipment also had to fit in a restricted technical area, offering just four metres of throw distance for the content. Our engineering team therefore created bespoke mechanical rigging structures to make the best use of the available space. The University provided its own software application to deliver the content, which is loaded in a master PC before being relayed to five slave PCs and then on to the projectors.