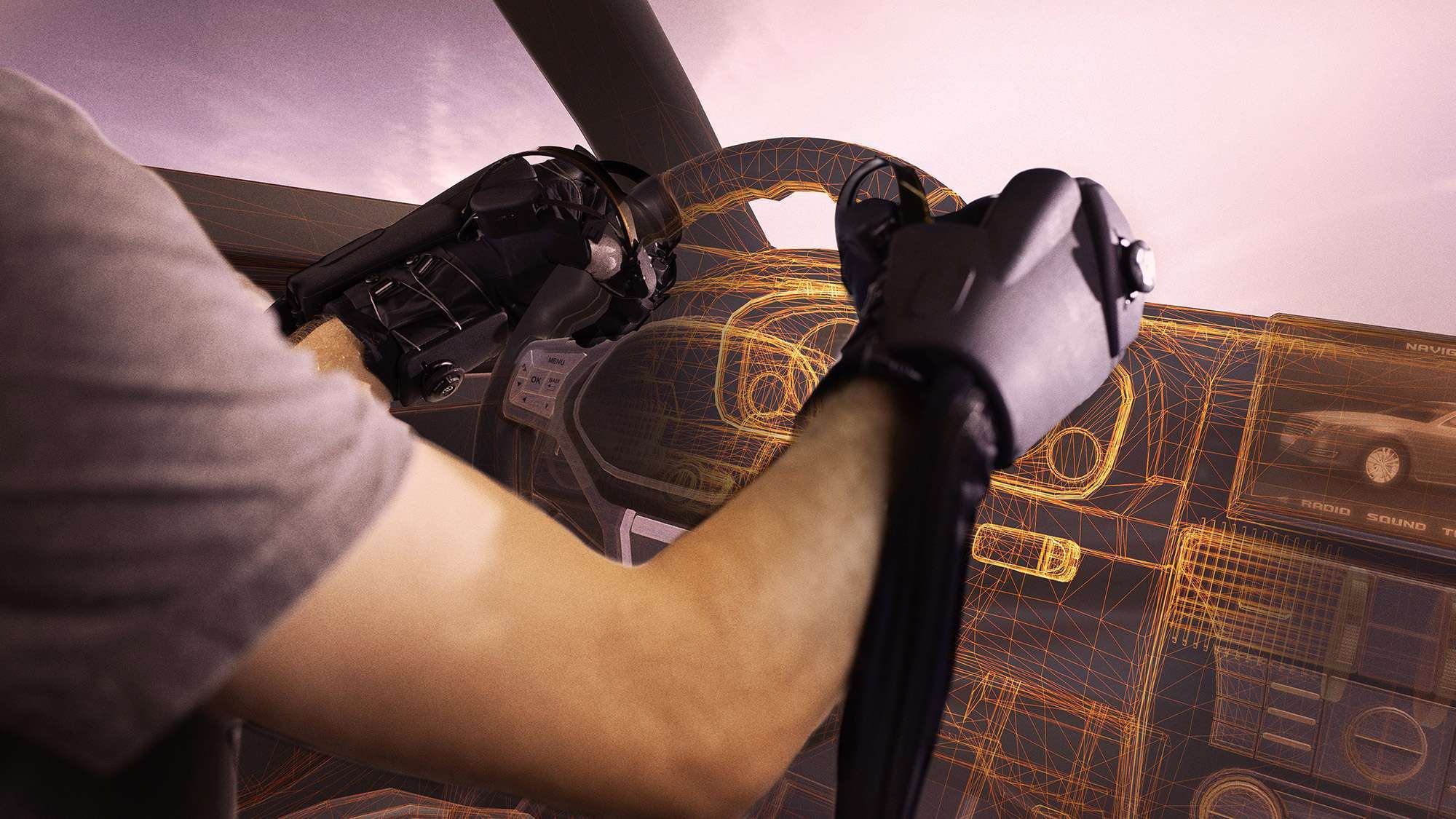 Touching the virtual with HaptX gloves

Virtual reality (VR) technologies have a wealth of room to develop and innovate.

The fidelity of the ‘realities’ that VR constructs can be pushed further by incorporating elements that go beyond audio-visual stimuli.

Appealing to our other senses is the most effective way to bring VR closer to real life. Haptic feedback is the use of touch to communicate with users of a technology.

This commonly takes the form of vibration, for example in the controllers of video game consoles to simulate in-game shockwaves, or in mobile devices in response to an incoming call or text message.

But how can realistic tactile sensation be delivered through a virtual world?

HaptX gloves may present the answer.

What are HaptX gloves?

Worn on the hands, HaptX Gloves DK2 are used in conjunction with VR and haptic robotics to provide a sophisticated VR interface.

Tactile actuators displace skin up to 2mm to apply physical pressure, replicating the sensation of coming into contact with a real-world object.

They enable exotendons to apply resistive force to the fingers, combining with the true-contact haptics produced by a microfluidic skin to deliver the immersive outcome.

The gloves are designed with industrial-grade haptic technology, featuring a mix of established approaches to haptics with unique, patented technologies. They track motion with sub-millimetre accuracy and their textiles can move thermal energy around the skin, simulating hot and cold feelings.

What do HaptX gloves do?

Their creators seek to replace the plastic controllers that typically come packaged with VR head-mounted displays (HMDs) to give users a more authentic way of interacting with virtual experiences – by using their hands as they would when exploring the real world.

HaptX gloves deliver haptic feedback to simulate the feel of interacting with physical objects. However, the technologies the gloves utilise push the simulated interactions further, and a major part of this technology is HaptX’s microfluidic technology.

The microfluidic textiles can create:

When the human hand touches an object, pressure on the skin is interpreted by receptors and processed by the brain to capture all of the information we perceive from that touch. The main area of the brain responsible for taking in touch signals and translating them into perception is the somatosensory cortex, which also interprets pain and temperature indicators.

Our fingers contain many more receptors than parts of the body such as the back or chest, which is why they are our natural extensions for reaching out and interacting with objects.

In haptics technology, devices known as actuators can help to simulate the pressure one feels on their skin from touch via mechanical movement.

HaptX actuators are incredibly small, and the gloves offer over 130 points of feedback per hand. Their individual pressures can be varied according to the ‘object’ being touched, allowing for specific variations demanded by complex shapes.

Temperature is a complex sensation to simulate, and requires a great deal of energy to pull off convincingly.

HaptX’s solution involves small reservoirs of water that are heated or cooled, then moved across the surface of the user’s hands through its microfluidic technology. Due to the efficiency of heat exchange between the water and skin, the water can continuously flow for reheating and cooling.

But what about the material you touch? The heat we feel from an object depends on the conductivity of the object itself; a cold metal object will feel much colder than something made of fabric, even if both are at the same temperature. Heat is drawn from the skin much quicker by cold metal or water than by cold fabric or wood.

Use of heated and cooled water allows for an energy-efficient thermal feedback solution that doesn’t demand a lot of physical space, nor requires direct heating of the user’s skin.

Vibrotactile feedback is a commonly used form of haptics that can convey subtle information to us in many ways. An aforementioned form of this feedback is the in-built vibration that features in many videogame controllers. This vibration typically triggers in conjunction with some kind of on-screen force, helping to add a tactile element to gunfire, an earthquake, or a hard landing for a character.

In the real world, vibrational feedback gives us important information that we may not even be aware that we’re using. Feeling vibrations through the ground, for instance, can signal an approaching vehicle long before you’ve seen or heard it. Tapping an object can help reveal the material it’s made from by measuring the vibration response (e.g. metal rather than plastic).

In VR, this kind of feedback can be used to convey the roughness of an object, or whether it’s solid or hollow. The advancement of vibration actuators means that HaptX can utilise off-the-shelf solutions to create high-fidelity vibrotactile feedback in its gloves.

Force feedback in the HaptX gloves is delivered via a lightweight exoskeleton system. Since force is not felt primarily through the skin, unlike touch and heat, this facet of the user experience (while wearing the gloves) cannot be achieved through the microfluidic textile technology.

Force feedback adds elements of weight and impact to interactions with objects and forces in the virtual world. Following HaptX’s vision of a full-body exoskeleton, this force feedback could be applied in a wide variety of ways. For instance, resistive force on the legs could help sell the experience of traversing boggy terrain or trying to walk against strong wind.

While more demanding than the other types of haptic feedback discussed above, force feedback VR gloves can be just as instrumental in creating a deep virtual experience.

What is the technology behind HaptX gloves?

While some of the technology included in the HaptX gloves derives from off-the-shelf solutions, such as certain actuators, much of the design hinges on novel, patented haptics technology.

Microfluidic skin enables the use of tactile actuators that apply pressure to the skin to simulate touch.

Magnetic motion tracking offers low-latency, highly accurate tracking of user movement. HaptX’s accompanying software generates an accurate hand model in the VR world which can be sized according to the span of the user’s real hands to help.

Force feedback exoskeletons use pneumatic actuators to apply up to 40lbs of force per hand, complementing the work of the microfluidic skin to simulate weight and force.

Beside their hardware, HaptX also offers a software development kit for integration with game engines like Unity and the Unreal Engine, as well as a C++ API for communication with robotics equipment.

How can HaptX Gloves DK2 be used for enterprise virtual reality solutions?

HaptX gloves can be used in conjunction with a VR project to bring a whole new dimension to the user experience.

For experiences that rely on deep immersion for education or therapy, haptic feedback can help users better engage with their experience or get past the uncanny sensation of navigating a VR environment. For game developers, HaptX gloves can also be used to give players more ways to interact with the gaming environment and enrich the choices available to them.

While training users in safety-critical areas such as engineering and construction or defence and military, haptic feedback can be used to more accurately convey the feeling of operating a vehicle or using a powerful tool. The fidelity of the user’s interactions can also help to develop muscle memory when performing a repetitive task.

For instance, thermal and vibrotactile feedback can help the user to understand how quickly a tool might overheat, and how that might feel in the hand in order to accurately anticipate and adapt to such an event.

The future of immersive VR

VR and simulation solutions are already proving their worth as tools in training, therapy, education, and many other applications for various industries.

When haptic technology such as the HaptX Gloves DK2 meets immersive simulation environments such as ST Engineering Antycip’s VR CAVEs, the capacity to fully enshroud users in true-to-life virtual reality becomes greater than ever.

To learn more about the applications of HaptX gloves in VR, contact us today.