What is the role of STK in space missions?

The physics-based software package from Systems Tool Kit (STK) from our partner AGI enables engineers and scientists to complete complex analytical exercises, design systems architecture, carry out modelling or simulations of ground, sea, air, and space platforms and share the results in one integrated environment.

On top of its applications, STK Astrogator and STK SOLIS, are especially useful and valuable to engineers and scientists involved in missions where spacecraft operations and critical space assets must make precise manoeuvres.

This post examines the challenges space presents, the importance of space situational awareness and proximity operations and the role of STK, listing the benefits of its applications.

Typically, we think of space as vast and empty except for a few asteroids and planets. However, after more than 70 years of space missions and exploration, it is becoming more crowded. Space debris continues to accumulate, along with a concentration of both active and decommissioned satellites. Any space mission will need to take that into account, whether it is to avoid a collision, conflict or interference with their operations.

There are several strategic and operational aspects to do so practically. One is Space Situational Awareness (SSA), and another is proximity operations.

STK provides the essential simulation, modelling, visualisation and analytical capabilities to support a new generation of autonomous and semi-autonomous spacecraft charged with carrying out delicate and precise manoeuvres.

SSA encourages understanding of the near-space environment. It allows people to monitor and analyse their space assets, locate certain satellites, what may have changed and what they can see along with their visibility to other orbiting objects.

When satellites are vulnerable to space hazards and disruptions in space, the consequences can have wide implications because they are responsible for:

The main objectives of SSA are to look out for potential hazards, monitor the population of orbiting space objects and check the functionality of space assets.

As more items and debris have appeared in space, SSA technology has had to evolve so it can track and catalogue these elements effectively. Much of this advancement centres on the management and interpretation of data. SSA relies on measurements from satellites themselves and from ground radar data but also increasingly, from simulation and modelling.

Systems Took Kit (STK) can work with different data sources as well as using data for visualisation and simulation. It enables users to deal with complexities and challenges arising from spacecraft operations and the management of space assets.

Precise manoeuvrability is essential for spacecraft operations. It involves various critical aspects including engine control, fuel use and overall management of the spacecraft.

Proximity operations are important because they allow spacecraft to inspect, repair and monitor other space assets.

Modelling provides opportunities for scientists, engineers, operators and commanders to better understand a spacecraft’s movements and to visualise their trajectories. That is particularly important with regards to foreign spacecraft which, without the appropriate analysis and knowledge, can pose a hazard to other objects in orbit.

Performing a simulation within an STK application suite also means operators can follow up with a further analysis of communication links, radio interference and lighting conditions. It helps builds a complete picture while accumulating knowledge to assist with planning space missions as accurately as possible.

The application STK Astrogator supports trajectory design for spacecraft and interactive simulation of manoeuvres. That makes it a perfect planning tool for space missions.

For spacecraft trajectory, it has a dedicated Mission Control Sequence that can define an entire space mission, providing a visualisation of the different segments involved. These include the craft’s initial and launch states, its manoeuvres and sequencing.

The application uses search profiles to define goals and, where necessary, to modify variables in order to reach them. Its target sequence uses a root-finding algorithm to change the value of independent variables.

It also offers users both versatility and flexibility to configure spacecraft and space missions. They can build mission control sequences, define key physical values such as fuel tank capacity and outline departure and arrival conditions of the proposed mission.

It is also possible to model multiple spacecraft flying in formation using the application, which helps in the analysis of satellite and constellation maintenance missions and other situations requiring proximity operations.

STK Astrogator also works with additional plugins, making it scalable as well as adaptable, and it has extensive reporting capabilities. 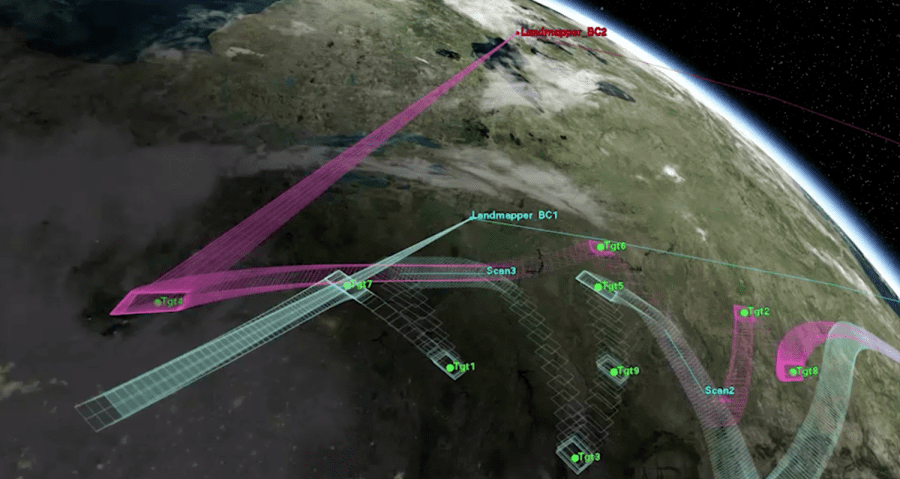 The STK SOLIS application provides a complete spacecraft simulation environment. It is extremely useful for modelling the potential impact space conditions will have on spacecraft during missions.

SOLIS enables engineers to evaluate system capabilities in spacecraft and consider any constraints early in the spacecraft’s lifecycle. It will configure spacecraft components, including sensors, actuators, communications power and payload. SOLIS also allows engineers to create and save templates of optimal configurations to help with rapid assessments.

It can also emulate flight software using mission sequence modelling, along with telemetry and real-time commanding.

Not only that, it can generate control system configurations automatically, for flight avionics.

STK SOLIS has distinct modelling functions to visually determine the spacecraft’s attitude in relation to its environment. They are:

It also provides mode control to determine orbit, velocity and tracking and supports both the design and operations of spacecraft.

It has a target planning function for rapid generation of mission sequences, which incorporates actual spacecraft algorithms. That means you are only using real and accurate constraints in your modelling.

For spacecraft design, SOLIS enables operators to specify mission requirements and analyse the system concepts to meet them. It will analyse and refine conceptual designs, verify final versions and provide independent validation.

The benefits of STK to space missions

More and more, spacecraft simulation is playing a vital role in space missions. Given the time and sheer expense of designing, constructing and launching spacecraft, it is critical that engineers can minimise margins of error. At the same time, the overcrowded environment of space makes those challenges more acute.

It makes sense, therefore, to be able to plan in detail on the ground, using sophisticated modelling, visualisation and simulation software. Those applications provide detailed and accurate analytics to help ensure the success and safety of space missions.

An effective simulation environment provides an opportunity for the planning of close proximity operations and for refining space situational awareness methods.