With a turnover of 4 billion euros in 2016, Hutchinson is a world-leading automotive supplier, specialising in material transformation. Based in Châlette-sur-Loing (France), this Total subsidiary is headquartered in a former 18th century Royal paper mill and started out as a rubber manufacturer. Today, the company designs a large range of solutions for the automotive, industrial, aeronautical and aerospace sectors with products ranging from watertightness such as car joints to systems controlling noises and vibrations.

In order to develop its prototyping activity, Hutchinson called upon Antycip to deliver a four-sided immersive CAVE (Cave Automatic Virtual Environment) to allow the manufacturer to work in a virtual environment and manipulate 3D objects. Equipped with a joystick and 3D glasses, the operator can enter the virtual space thanks to infrared tracking cameras, walk around a 3D model, move it around and interact with it to study it from all angles.

In response to the brief from Hutchinson, Antycip recommended and installed four 3-Chip DLP Christie Mirage WU12K-M projectors. Boasting a WUXGA resolution (1920 x 1200 pixels) at 120Hz, the projectors display virtual images in the CAVE from the back of the screens. Three projectors are installed behind the front and side screens, while the fourth projector – rigged on a platform – projects on the floor using a mirror precisely angled by Antycip in order to negate shadowing.

The second room designed by Antycip within Hutchinson’s HQ is used for 3D demos. It is fitted with a four metre long by two metre high UHD 4K video wall powered by a Christie Mirage 4K25 120Hz projector (4096 × 2160 pixels). The glass screen not only provides incredible image quality, but is also interactive, allowing users to zoom in and rotate 3D models simply by touching the surface of the screen. Antycip used its expertise to ensure that the image quality provided by the high frame rate projector is not altered by the touching capabilities.

This state-of-the-art room is also equipped with infrared tracking cameras detecting the joystick movements when objects are manipulated on the screen. With all the attributes of a private projection room, the venue can comfortably seat up to 20 people for 3D presentations.

Jean-Yves Lachartre, IT manager in the Research & Innovation Centre at Hutchinson, comments: “These rooms are made available to our colleagues and clients to collaboratively work on various projects and to help with the design of new products. The VR and 3D simulation capabilities allow for a far more realistic working approach compared to classic presentation rooms.”

Johan Besnainou, Antycip director for France and Spain, enthuses: “We are proud Hutchinson chose us to implement this CAVE and 4K video wall. We got involved in the project in the very early stages, from conception to product selection, all the way through installation and delivery."

Content-wise, the Christie projectors integrated by Antycip Simulation in the CAVE environment are fed by HP Z Station work stations controlled by a master computer, while the most popular CAO-DAO 3D software is used. The 4K Christie projector in the video wall room is coupled with a powerful working station using Nvidia Quadro P6000 cards capable of delivering fluid 3D images.

After winning the Hutchinson tender back in 2016, Antycip Simulation worked closely with architect Encore Heureux to list part of the technical requirements for the 507 - Fab House - the building which hosts both immersive rooms, as well as a number of meeting and leisure rooms. Acting as a real showroom, this 4200 m2 industrial building was entirely refurbished under the management of Hutchinson’s CEO Jacques Maigné. It is now dedicated to training, seminars, research and presentation of the company’s products. 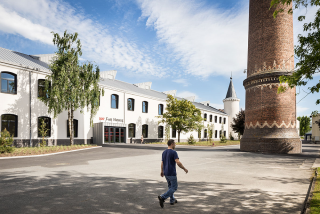 The former Royal paper mill was acquired by Hiram Hutchinson in 1853 to turn into a rubber boots factory. Destroyed by a fire in 1869, the illustrious Gustave Eiffel helped to rebuild it. As Jean-Yves Lachartre summarises: “These immersive rooms are the perfect example of Hutchinson’s investment in innovation within a building that perfectly links the company’s rich past with its future.

“Antycip Simulation more than met our expectations and was a great partner to us throughout this ambitious project. The team’s expertise and experience working with virtual reality and immersive technologies shines through, and combined with a clear focus on service and customer satisfaction it’s a recipe for success. The end result is exactly what we want to achieve with the Hutchinson Research & Innovation Centre.”

The rooms have already been used for thousands of hours by engineers and designers, who are harnessing the capabilities of the facility to aid their work on the products of tomorrow.

Concludes Johan Besnainou: “Hutchinson is an undisputed leader in its field, and innovation is in the company’s DNA. This project illustrates our expertise in VR engineering, our capacity to integrate the technologies from our partners and to provide powerful and effective solutions to answer the needs of our clients.”