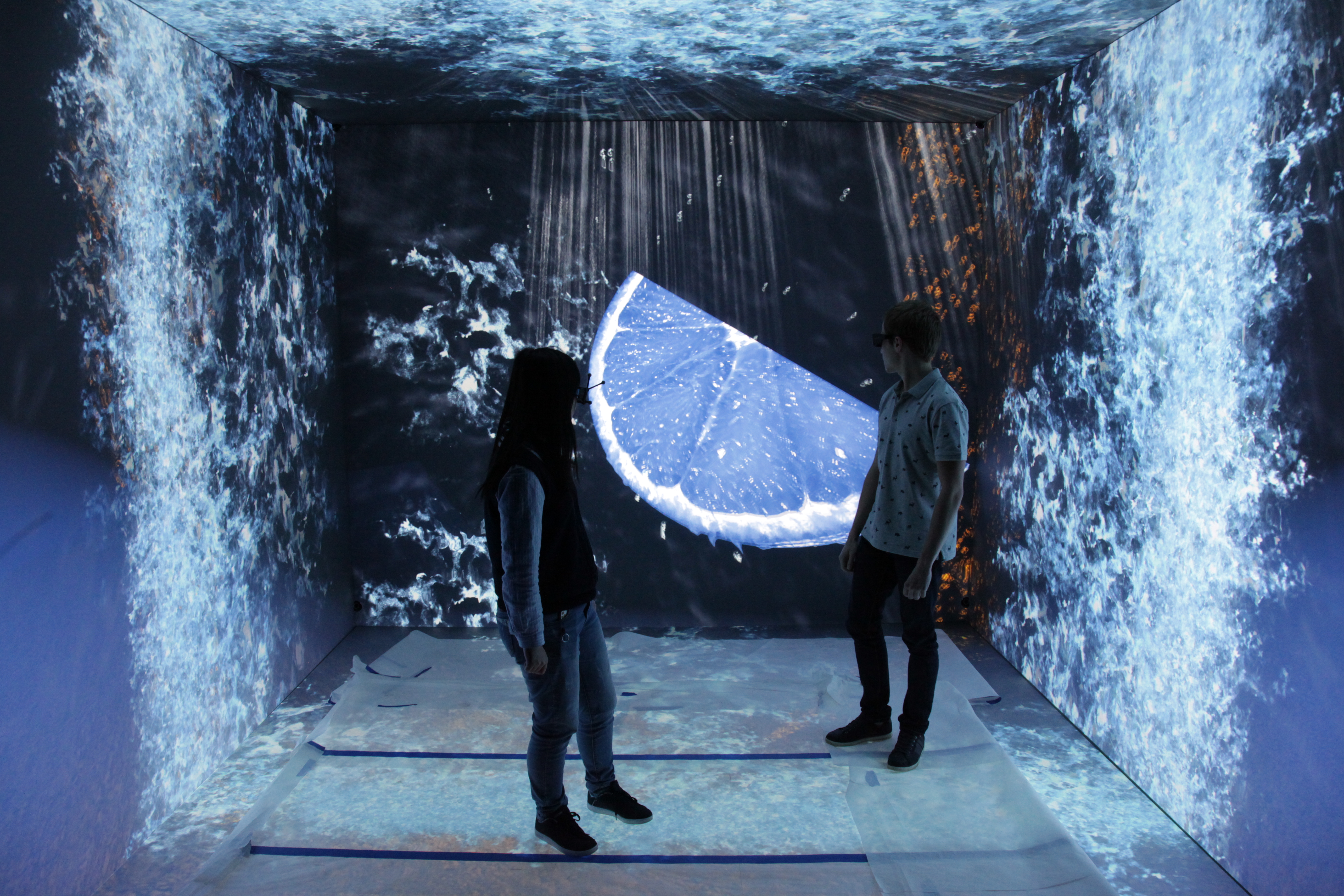 Paris (France), 12 November 2019 – As a major technological establishment and founding member of the Future Industry Alliance, l’École Supérieure des Arts et Métiers (Les Arts et Métiers) comprises eight campuses and three institutes spread over French territory. The school trains more than 6,000 students each year, with the main task of training engineers in the fields of industry, research, and socio-economics. Through training, 14 laboratories and partnership research, Les Arts et Métiers aims to be a major contributor to industrial innovation in France and Europe.

It is in this context of evolution and technological innovation that Les Arts et Métiers, with the help and expertise of VR integrator Antycip, has opened a virtual immersion room installed at the Image Institute in Chalon-sur-Saône.

Financed by a combination of European, governmental and regional funding, BlueLemon is a free-standing five-sided VR CAVE with impressive dimensions, featuring three metres wide front and sides panels and 3.4 metres wide top and bottom ones. It is part of the LiV laboratory which brings together Arts et Métiers and French car manufacturer Renault.

The visually striking content in the CAVE is retro projected thanks to five Christie 4K 25,000 lumen projectors, capable of displaying 1.2mm large pixels to best meet human visual resolution in normal conditions, as well as high contrast ratio in 3D. The system is equipped with a multiple field of view, allowing two users to work collaboratively and simultaneously in the device with dedicated points of view. A spatialised sound system completes the device and increases the immersive feeling.

Three areas of research are developed in particular within this CAVE: virtual and augmented reality for the industry of the future, driving simulation, and virtual environments for education and health. The facility is also typically used as a tool for industrial prototyping as well as for conducting research on multi-sensory immersion techniques for VR and AR digital models interaction. Its aim is to help develop VR technologies while acting on different sensory modalities.

The integration phase called in the entire scope of expertise from the French integrator in order to study, design and conceive the complex mechanical requirements for the self-standing device, including the integration of five glass screens weighing a tonne each, as well as the various factory acceptance tests before delivery.

The integration process was made more complex by the need to work at a height between three and seven metres. The glass panels were laser-cut before being installed, with a space on each corner of the cube to allow the installation of cameras that interact with a full body suit worn inside the structure.

Antycip then fitted the projectors with reflecting mirrors, as well as the computer graphics system for the content. The final stage consisted in adjusting the projectors colorimetry and convergence, installing the PC suite, the tracking and spatial sound systems, cabling, as well as Antycip’s proprietary control system.

Laurent Champaney, director of Les Arts et Métiers, explains: “With BlueLemon, our goal is to invent the industries of the future, which is particularly important for academic research as well as for large companies. It is a major milestone for Les Arts et Métiers, the city of Chalon and its region, as it reinforces our position as a hub of excellence.”

The BlueLemon VR room hosts studies on Renault's collaborative engineering use cases. It also facilitates the transfer of technology for regional projects and supports the Franco-German Institute for the Future Industry, combining Karlsruhe Institute of Technology (KIT) and Arts et Métiers.

Concludes Johan Besnainou, France & Spain director for ST Engineering Antycip: “The BlueLemon project, with its goal of planning the future, has been a fantastic project for Antycip to work on and is another expression of our expertise and knowledge in delivering cutting edge virtual reality projects.”