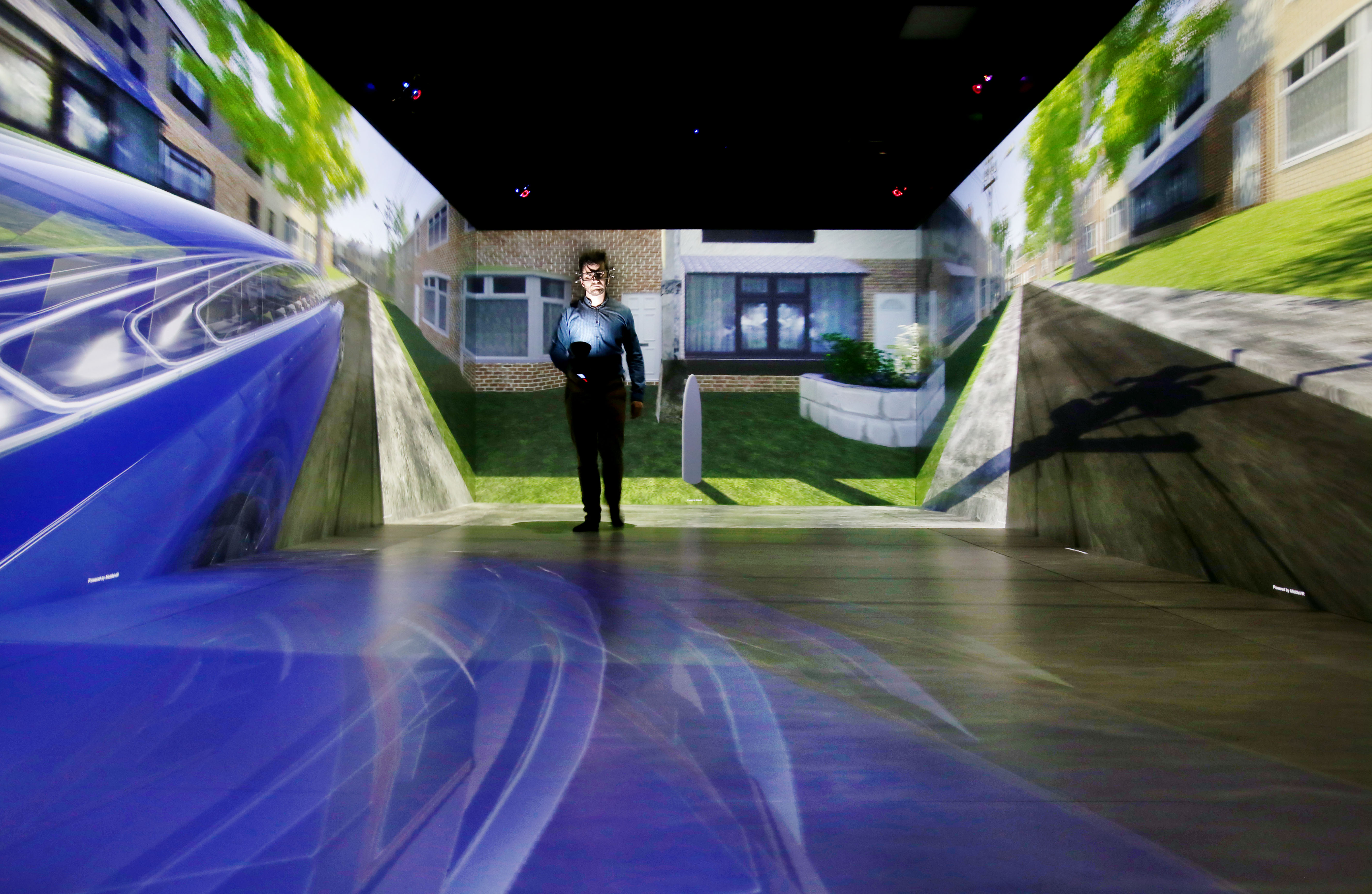 “The primary reason to build the HIKER was to investigate how humans interact with existing traditional vehicles and compare this with automated vehicles,” he began. “The system will also be used to design a range of future transport systems as part of Virtuocity - our centre for city simulation. We have used HMD (Head Mounted Display)-based VR systems in the past to study how pedestrians interact with automated vehicles, but really this was just to prepare us to do the research using the HIKER.”

Transport research is very important at the University of Leeds, with its Institute for Transport Studies currently ranked seventh in the world. The Human Factors and Safety group at the Institute focuses on the human-centred design of transport systems using both field research and immersive, human-in-the-loop, simulators.

The HIKER supports a large walking area - 9m x 4m - as well as providing eye-limiting graphical resolution. Its size allows real walking, which improves the transfer of experimental results to the real world. The system allows a variety of research that is not easily supported by an HMD. This includes testing systems such as smartphones, physical barriers, curbs, and pedestrian refuges. In addition, the HIKER makes it easy to evaluate a wider age range of participants and we can more easily introduce multiple participants into an experiment. [caption id="attachment_1816" align="alignnone" width="757"] 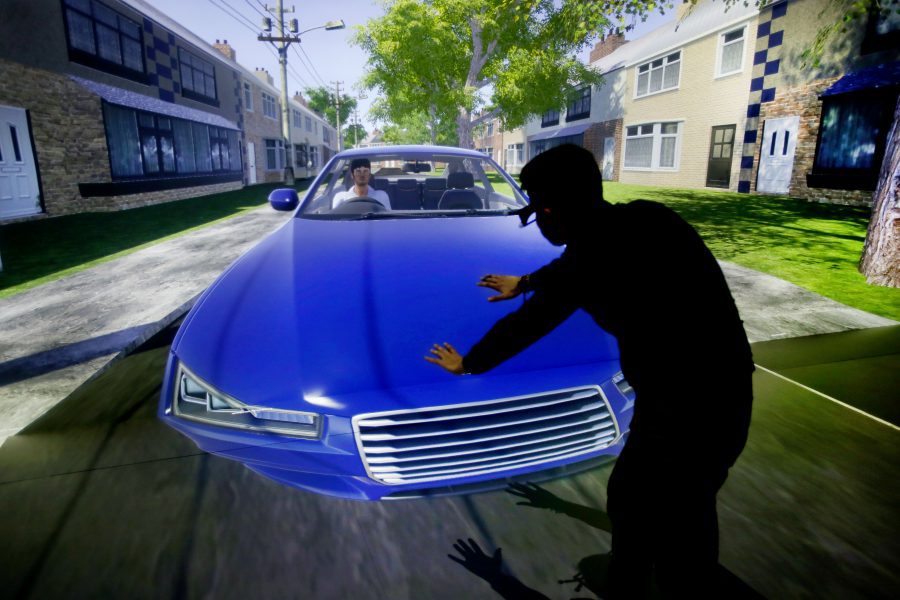 Commercial development manager for Antycip, John Mould, was brought on board to help qualify the requirements and support needed for the project, as well as organising demonstrations in the UK and Belgium. “After generating the ITT response documentation integrating the technical requirements, we worked closely with the projector manufacturer for this project, Barco, to present the final system to the end-user,” he explained. The University of Leeds has been an existing Antycip client for more than a decade prior to the HIKER project, going back to the days when the company used to sell COTS software tools to be used on their advanced driving simulators. “We were involved with Leeds in the early days of the HIKER project by helping them explore relevant technologies during the pre-tendering stages,” Mould said. “Our first job was to look at high-resolution projection technologies that could offer a short depth of throw and be configured to create an unconventionally long rear projected CAVE-like virtual corridor for pedestrian simulation. “Antycip had to explore the unique folded optics from Barco to enable the required compact light paths to be realised within the defined physical projection space and to demonstrate the capability of the pulse architecture to switch between pixel shifted 4K resolutions and stereoscopic WQXGA resolutions to offer two different operational modes.” Barco screens were specified alongside a number of its F90 Laser Projectors, which are capable of providing razor-sharp images with highly saturated colours at 4K UHD resolution With this formidable hardware in place, it was then time to deal with the logistical side of the installation. Antycip was able to draw on a long history of providing CAVE-like displays, many of which have been custom-tailored to suit specific technical and operational requirements. “Our team in France had already designed and delivered an elongated CAVE before, though not with such short depth constraints for the light paths behind the faces,” said Mould. The specifications of the HIKER CAVE project dictated that two 9m long side faces be implemented, which required that single-piece glass substrate screens had to be utilised to address the dimensions. A specialist optical coating also had to be used on the screen surfaces to ensure good quality blending, wide viewing angles, high contrast and low reflectivity. Often with any largescale display requirements of this nature, existing access restrictions can soon turn into serious challenges. In some cases, the choice of solid substrates like acrylic and glass necessitates the actual fabric of a building having to be altered just to gain entry. “This, fortunately, was not the case with this project,” confirmed Mould. “Although the sheer scale of the screens involved did require careful planning during our integration process.” 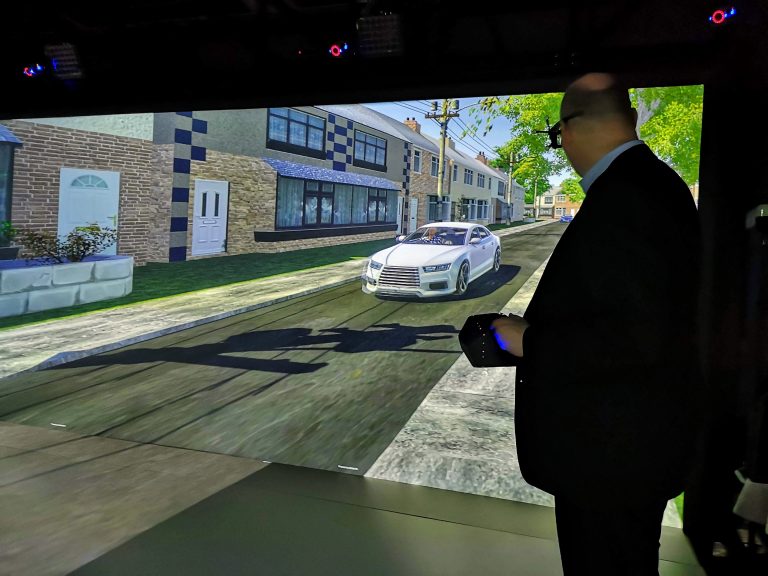 Antycip’s project manager on this job, John Burgess, was faced with the logistical challenge of working out how to safely deliver two huge solid glass substrates (measuring more than 9m x 2.5m, minus their packaging) inside the confines of the room. Once safely inside, another hurdle was figuring out how to assemble the complex mechanics for the display's structure within the given space. To further account for the confines of the room, ultra-short throw lens optics had to be specified on the selected Barco projectors. Aside from the screens and projectors, the HIKER lab required a VICON tracking camera array with a set of full-body reflective markers, an equipment rack with dedicated PC-image generators and a VIOSO camera-based autocalibration system. “It was great to see the autocalibration process from VIOSO for the first time,” said Mould. “The system was able to capture the geometry and blending requirements for four separate facetted display surfaces and apply this calibration directly to the pulse electronics on-board the Barco F90 projectors so they could implement any digital corrections directly, as well as giving the ability to switch between stereoscopic and pixel shifted resolutions of operation.” In addition, Antycip also had to provide a temporary removable floor surface to allow for possible future ‘smart-floors’ to be integrated and provide the control ability for the solution to switch between its operational modes. Mould added: “Antycip and Barco utilised our design tools to flesh out a configuration for this display that would meet the goals of the University to deliver the size of immersive environment they wished to experience, while affording the ability to explore forethought into the future maintenance access requirements, which were subsequently built in to make the design practical in use. “This was the first time we had combined such a particular recipe of parts, but we were confident in the technologies we chose. On reflection, we believe the end product is definitely an impressive – and hopefully, fruitful – addition to the research campus at the University.”