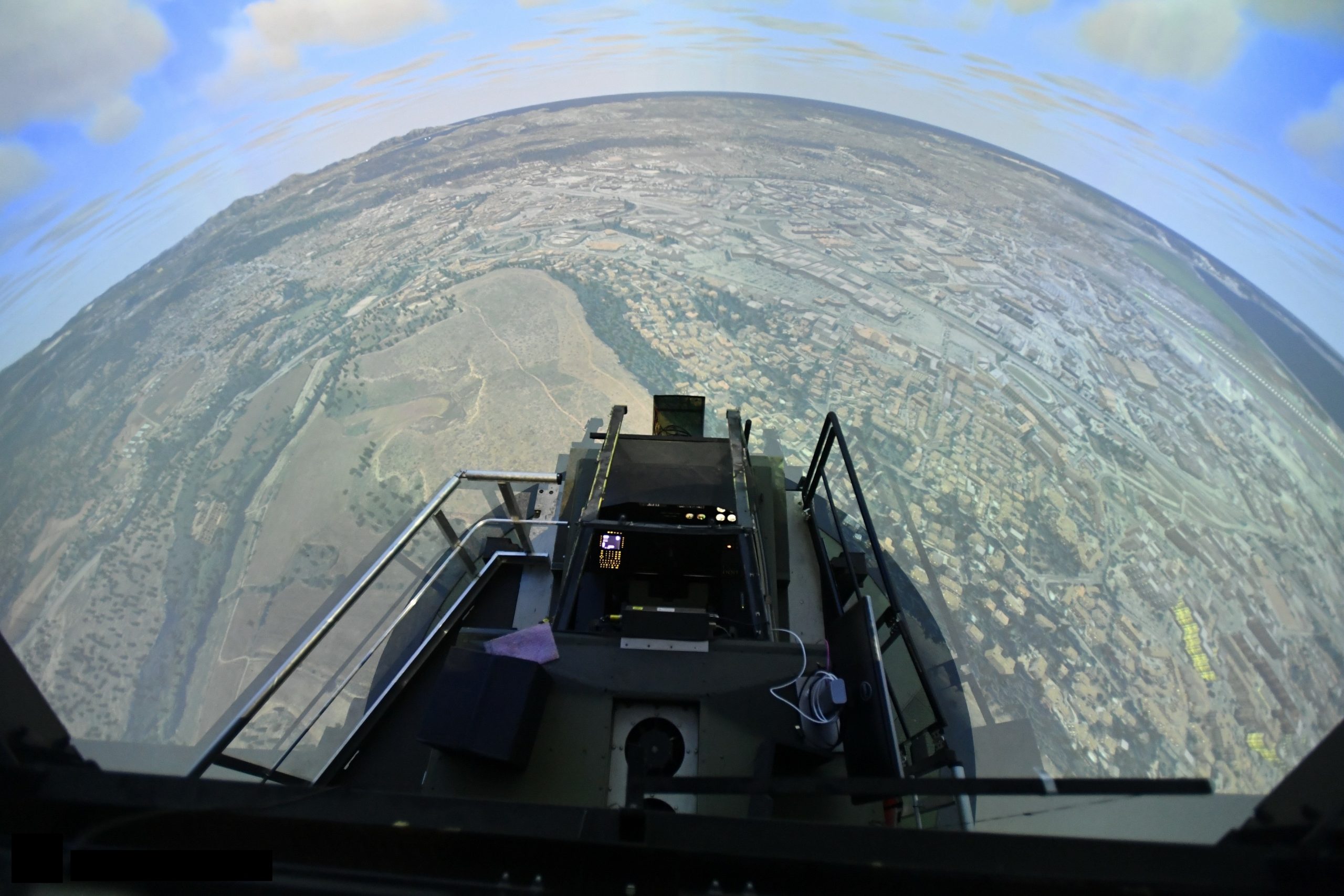 The project, which has been two years in the making, concluded with a few final tweaks of the system in June of this year.

“The system is based around a test room that is used to control the simulation and monitor the tests being undertaken, and two cockpits (one for the pilot and one for the shooter) that control the simulated aeronautical systems, which are installed in two projection spheres,” explained ST Engineering Antycip’s key account manager Quentin Blancheri. “The spheres aren’t for training but rather for studies and tests where human behaviour and decision making can be assessed in various environments or situations. The military call this simulation model ‘human-in-the-loop’.”

ST Engineering Antycip’s team designed and deployed the projection supports to install four Barco FL40 4K true solid-state projectors (with the aim of achieving a 210° field of view), as well as five new monitor screens for the ‘re-copy room’ where data is gathered and processed.

“We choose the BARCO FL40 because of its ability to go up to 4K using LED light source which mean a constant colour & light with a reduced maintenance. The Pulse software offers us a lot of possibility in order to remotely control & manage the projectors, and the longevity of the product was one of the key factors for choosing it,” explained Blancheri.

The project began with a definition study of each sphere in order to define the exact location of the four necessary projectors and cameras used to calibrate the system.

“The projection surface was already there and so were the test patterns for calibration,” said Blancheri. “Both domes have been in use for about 20 years, though they are regularly updated, and are made from a hard-composite material.

“We had to use the same Image Generation (IG) PCs for the same projection surface between the two spheres knowing that they are physically not identical,” he continued. “The diameter, height, and mezzanines that supported the projectors were both slightly different. In addition to the difficulty of positioning the projectors in the same places in order to have a similar projection surface, we also had to position the optical blenders, which are mathematically precise tools, in the same position.”

Scalable Display Technology’s self-calibration software was chosen and deployed, with the permanently installed camera locations and laser points defined by an expert surveyor.

“We used Scalable Display for four channels because it’s very easy to use once it’s been set up,” said Blancheri. “We have three cameras per sphere linked to the software, though all of the content manipulation is handled by a third party.”

The room housing the ‘re-copy screens’, which allow people outside the spheres to see what is being displayed inside, is situated 50m away from the spheres whilst the IG technical room sits 90m away. Both rooms are connected by fibre optic cabling, which was installed by the military, rather than Antycip, for security reasons.

Blancheri summarised: “The end result is very close to the original brief. Some features were developed and integrated specifically by us for piloting, with automatic starts and offline web interfaces, which reduced the technical complication of the device.”

As well as the usual logistical constraints, a number of complications arose due to the sensitive nature of the project itself.

“Firstly, we had to be capable of delivering within tight timeframe – both in terms of the entire job and each day on site during the install,” said Blancheri. “Then you have the added complication that we weren’t authorised to touch the IG PC, but still needed data from it in order to integrate them into the calibration process. As a result, we had to translate the issues to allow the military body to check and solve issues on the other side.

“We also had no say on the PC to projector cabling (90m of fibre optic cable). Again, this stretched the deadlines, and required flexibility and reactivity as we didn’t know exactly what cables were used.”

Although the projectors do not have night-vision capabilities, the effect has been achieved by using GVBI’s Chronos Glass: Grayscale optical blending, which makes use of a glass mask put in front of the lens.

Since the installation, the customer has been trained in the use of its newly upgraded simulator and Antycip-designed simple launch and piloting phases via several buttons placed directly on the pilot or shooter's cockpit. These allow the launch of the searchlights, self-calibration, optical blending in night mode and, of course, the classic or emergency shutdown of the simulator.

“The end user was very satisfied with the integration itself,” said Blancheri. “They were particularly impressed by the quality of the images, as well as the optical blending and the overall quality of the projection. We also had excellent feedback on the second ‘shooter’ sphere where we built a bespoke mezzanine that wasn’t originally planned, which allowed us to get the exact same image as sphere one despite the projectors being installed in different positions.”

He concluded: “I think it also spoke to our favour that we could offer a team that would be close to the client geographically, in case any maintenance requirements arise in the future.”

Quentin Blancheri will be hosting a webinar in partnership with Barco on the 1st December 2020 where he will present an overview of this project as part of a webinar on simulation solutions for the Defence market. During this webinar, Sondre Fauskanger, senior product manager at Barco will also provide highlights into Barco’s newest FL40 MKII solid-state simulation-ready projectors.

Register for the webinar here: https://steantycip.com/events/barco-simulation-webinar/