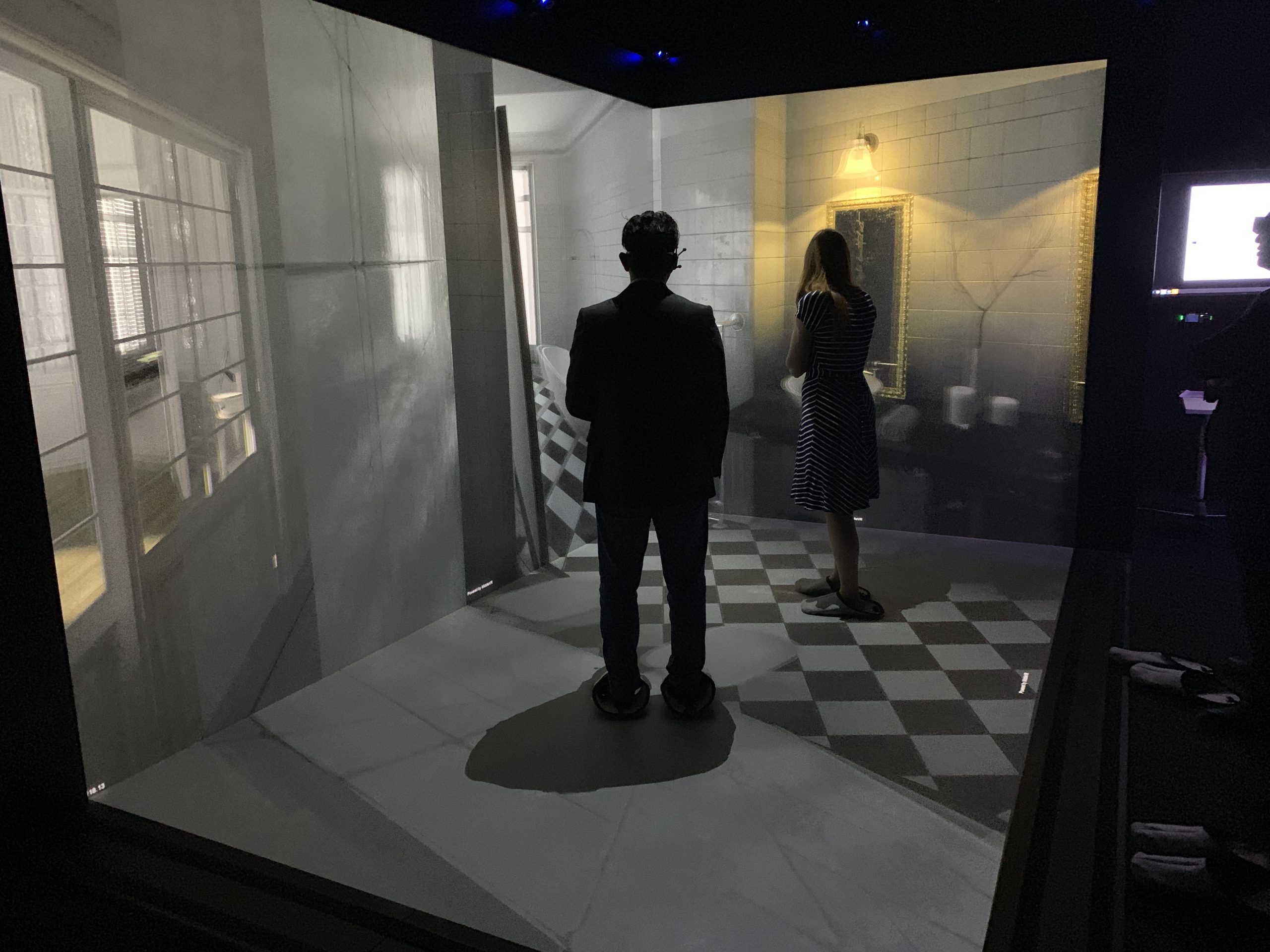 Paris (France), 26th May 2020 – The University of Huddersfield recently installed a state-of-the-art VR CAVE system at its new Barbara Hepworth Building, named after the famous sculptor. Home of the School of Art, Design and Architecture, the building boasts a 7,500sqm space and is designed to support multi-disciplinary learning. The VR CAVE, housed in the School’s Phidias Lab, was installed by VR integration specialist ST Engineering Antycip (formerly Antycip Simulation) on behalf of its client Roche AV.

Designed to function as an experimental AR and head-mounted display (HMD) facility, the Phidias Lab promotes the development of the school’s digital strategy through encouraging the creation of digital content and immersive VR. It is home to an eight-screen video wall with several modes for exhibiting and presenting, a motion capture area, a feature sound and lighting system and now, a highly advanced immersive CAVE system.

Surrounded by a 16-camera Vicon motion capture system, the CAVE supports a wide range of virtual environment needs. It provides students from a variety of academic subjects the opportunity to develop their design concepts, without the need for potentially expensive physical models or printed material.

Roche AV, an audio-visual specialist and incumbent supplier to the university, was appointed to populate this prestigious new building with modern technologies. They got involved with the immense Phidias Lab project after successfully integrating AV systems within the Oastler building. When assigned the CAVE project, Roche AV called upon VR specialist Antycip to design and deliver the immersive projected display environment.

Antycip was tasked with providing a software platform that uniquely offers the ability to instantaneously bring industry standard applications into a stereoscopic VR environment, saving engineering time and effort while providing a fully interactive and unforgettable virtual experience.

Antycip designed a three-face CAVE, comprising of three solid state Barco F90 laser projectors. Boasting 4K resolution and 3D capability, the projectors are equipped with ultra-short throw lens optics to address the primary front projection face of the CAVE and the wing face positioned on the right side. Both projectors are inverted and enable huge savings on the real estate required for the rear projection throw distance behind the solid specialist rigid acrylic substrate screens.

A third F90 projector utilises a specialist mirror to fold the light path down to the floor, where the content is combined with the two rear projection surfaces, thus offering a truly immersive display environment. Each projector is fed a high bandwidth stereoscopic signal using pure fibre optic based cable links to avoid potential electromagnetic interference. 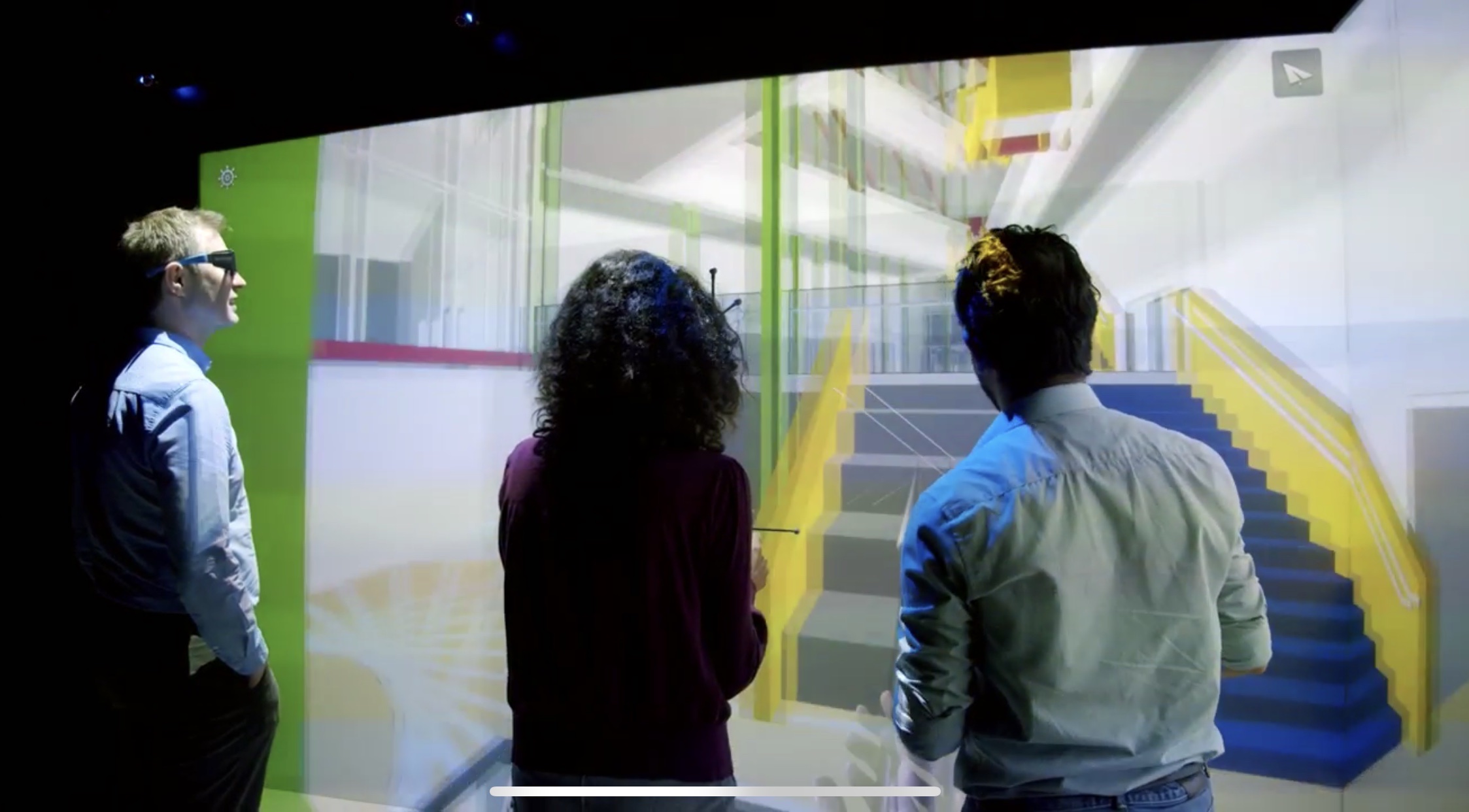 Vicon spatial tracking cameras are calibrated to offer an interactive volume within the display, so that a dynamic eyepoint can be tracked for a single user wearing the supplied RF synchronised active shutter glasses. This tracking system also supports the interactions from a wireless handheld device, used for navigation within the virtual content as well as to initiate and control any interactive feature activated from the TechViz software while immersed.

John Mould, UK commercial development manager for ST Engineering Antycip's Immersive Display Division, commented, “We listened to the university’s requirements and felt that a three-face CAVE system would offer the perfect medium for immersive visualisation, given their mixed application requirements.”

The CAVE design enables unique folded lens optics to maximise the room’s real estate while offering vibrant high-resolution images to this faceted array. The solution is driven by dedicated PC-image generators with GPUs synchronised in both hardware and software to address the demands of rendering large complex datasets.

Due to the varied use of the CAVE, the university required a system which could be used by students from a range of technical backgrounds and abilities. “We needed to mitigate the need for complicated programming or the use of additional programmes before a model could be viewed in VR,” said Stephen Calcutt, technical manager and co-ordinator for the University of Huddersfield.

“ST Engineering Antycip recommended that we use the TechViz software as its support of native applications such as Solidworks, Navisworks, Revit and Rhino, which are used by the School of Art, Design and Architecture, makes it a vital component of the ease of use system. It allows students to create and instantly display 3D stereoscopic interactive content within the CAVE that is dynamically linked to the applications they know, without having to convert complicated data first.”

TechViz’s compatibility with over 200 industry standard applications makes it a flexible system to use, as it will be able to adapt to the university’s changing requirements in the standard applications it uses for the foreseeable future. Without this vital system, students with no background in VR would find it challenging to get their datasets displayed within the CAVE, as they would have been forced to export or translate the file formats, optimise the rendering performance, and load the dataset into another third party rendering solution that can drive the CAVE.

Additionally, each university department relies on a diverse selection of applications specific to individual subjects and focuses, making it a challenge for a CAVE system to support the specific requirements of each department. The CAVE accepts any OpenGL visual based content, making automatic changes upon the original dataset without the need for reverse engineering. Live changes to the dataset can even be shown within the CAVE.

“Solidworks datasets can for example be opened up in 2D on the Host and TechViz will intercept this application, taking a student’s work straight into the CAVE supporting the spatial tracking system and a host of interactive features as they explore and review their data dynamically in an immersive manner,” explained Mould. “In short, it makes VR easy.”

The installation was implemented during a larger building project, which came with its own obstacles and challenges.

“The nature of the build made this project particularly challenging,” said Craig Pickard, director of projects from Roche AV. “We co-ordinated at a very detailed level with everyone on site in order to be ready on time. Specific planning was required to coordinate with the abundance of trades on site, including floor fitters, electricians, AV engineers and even air-conditioning operatives. We worked tirelessly with ST Engineering Antycip to complete the project in line with the building dates, ready with a working system for the student open day and unveiling of the building.”

The outcome was a VR CAVE which suited the university’s needs perfectly. “ST Engineering Antycip was receptive and cooperative throughout the project to ensure the best outcome,” said Craig Pickard. “The team worked collaboratively with us at Roche AV and the university to deliver the installation.”   “By demonstrating the approach in our HUB demonstration centre in Oxfordshire, the university could see how easy and beneficial stepping into a VR environment is, such as offering instant comprehension of their 3D models. It gave the university clarity on the project’s outcome before completion, and ultimately meant the final outcome was exactly as expected,” Mould said. “Combining our specialist knowledge with that of our partner Roche AV, the university had the reassuring strength of our two companies to successfully deliver this wonderful new asset.”